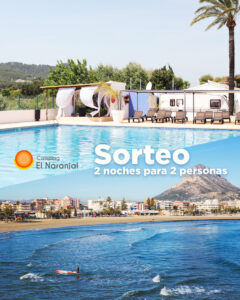 LEGAL TERMS AND CONDITIONS FOR PARTICIPATION IN THE RAFFLE

The requirements for participation shall be as follows:

Only persons residing in Spain and older than 18 years are allowed to participate.

Participants must comment on the posting of Mundo Campista Camping Card, on Instagram social network, by tagging 1 friend during the participation period.

Participants will be able to participate as many times as they want by mentioning a different friend in each comment.

Participants who mention professional profiles or companies will be disqualified.

The winner will be chosen through the platform AppSorteos randomly.

The winner will be announced on 20th of June in the social networks of Mundo Campista and Camping el Naranjal along with the certificate of validity of the raffle.

The prize is two nights in pitch at the Camping el Naranjal. The prize is for a maximum of two people, to enjoy from 27/06 to 17/07 or during the month of September.

The prize may not be redeemed for cash or any other prize, and it may not be modified.

Camping el Naranjal or Mundo Campista will not be responsible for travel, subsistence allowances, or other unspecified concepts.

The winner must book directly with Camping el Naranjal.

Dates will be subject to availability.

The prize must be enjoyed during the 2022 season.

The raffle will be held and the prize shall be awarded according to current tax regulations.

If it is evident that any of the Participants does not meet the requirements set forth in the Terms and Conditions, or the data provided to participate were not valid, their participation will be considered void, they will be automatically excluded from the Promotion and, therefore, they will lose all rights to the prizes awarded under this Promotion.

6.- PUBLICATION OF COMMENTS OR OPINIONS

Mundo Campista, Camping el Naranjal or Camping Review will not be held responsible for damages caused by comments made by Participants in the Promotion, and that at any time could hurt the sensitivity of other Participants.

Participation in the present Promotion as well as the publication of comments by Participants in publications may not violate under any circumstances the Instagram Community Guidelines or Terms of Use.

Including but not limited, we are not responsible for any losses, theft, delay or any other circumstance attributable to third parties that may affect the development of this Promotion, and we are not responsible for the Participant’s use of the Promotion Award, and we disclaim disability for any damage or injury that may be suffered by Participants, winner or third parties.

We do not assume responsibility in cases of force majeure or fortuitous event that prevent the development of the Promotion or the total or partial enjoyment of the prize. In case this Promotion could not be carried out, either for fraud detected in this promotion, technical errors, or any other reason that is not under the control of Mundo Campista and affecting the normal development of the contest, we reserve the right to cancel, modify, or call off the Promotion, including the participation website.

The winning Participant will be responsible for any fiscal or tax burden that the acceptance of the prize may entail, as well as any other expense arising from the Promotion that is not expressly assumed by Mundo Campista and Camping el Naranjal in these Terms and Conditions.

We reserve the right to modify or expand these promotion terms and conditions, provided that this does not prejudice or impair the rights of Participants in the Promotion.

The mere fact of participating in the raffle implies that the Participant fully accepts the conditions of these legal terms and conditions. In the same way, participating in a raffle of this nature implies acceptance of the guidelines of the Instagram social network through which it is developed.